How to Use Vanilla Beans: Ultimate Guide

So, you’ve decided to purchase some plump, grade A, Madagascar Bourbon vanilla beans for the first time – excellent choice! We’re confident that you’re going to be able to make many tasty vanilla-infused recipes, bursting with flavor. But now that you have them… what do you do with them?

We know vanilla bean pods can be a little intimidating. Knowing exactly how to use vanilla beans doesn’t come naturally, especially if you don’t know anything about them. You might be wondering whether you’re supposed to use the pods themselves in your recipe or just the beans inside as well as how many of them you’re supposed to use to spice your favorite sweet dishes.

To help, we’re going to take you through the process of cutting open, scraping, and using vanilla pods so you can start enjoying them right away.

What Is The Vanilla Bean?

Here’s a quick rundown on what the vanilla bean actually is so you know the true nature of what you’re dealing with here. The vanilla bean is considered the fruit of the Vanilla Orchid plant, otherwise known as genus Vanilla or Vanilla Planifolia.

Growing and harvesting the vanilla bean is quite complex as each plant needs to be hand-pollinated and carefully watched. While vanilla is grown all over the world with over 150 species available, vanilla grown in Madagascar is most common for commercial purposes. The two most popular types of vanilla used today are Madagascar Bourbon Vanilla and Tahitian Vanilla.

If you haven’t already purchased your vanilla beans, it’s likely you have no idea at all what they look like – I know I didn’t!

The vanilla bean is dark brown and has a shiny, waxy appearance. A healthy vanilla pod is plump, nearly ready to burst with vanilla beans contained on the inside. Vanilla beans are long, about five to seven inches.

Which Part Of The Vanilla Bean Do I Use?

How To Cut Open A Vanilla Bean

Now that we’ve established that you can use the entire vanilla bean, let’s take a look at how to scrape out and use the vanilla beans inside the pod. Although you can use both the vanilla pod and the beans, you don’t just cut off a piece of the whole pod and use it as is – the beans need to be extracted from the pod and each piece can be used separately.

What Do I Need?

The first step in carefully splitting open your vanilla pods is to remove them from their packaging. If your vanilla beans have been sent to you via mail, they were likely packaged in vials and/or in heavy plastic. Remove the beans from the packaging and place on your cutting board flat side down.

Taking a sharp knife, place the tip in the center of the bean. This should start just below the curled top of the bean.

Spread the bean apart slightly with your left hand and hold the top down. Flipping your knife to the dull side, run the dull blade down from the curled top to the bottom of the bean. This will gently scrape out most of the vanilla bean seeds contained inside the pod.

How Can I Use A Vanilla Bean?

You can use the pure vanilla bean contained inside the pod itself for a variety of baking purposes. This method is not as convenient or cost-effective as creating a vanilla bean paste or extract for your vanilla flavoring but it is definitely the most flavorful.

Some prefer pure vanilla extract as a way to get their burst of vanilla flavoring – and no, we’re not talking about imitation vanilla you find on your supermarket’s shelves. Pure vanilla extract is made by soaking whole vanilla beans or just the pods in a mixture of alcohol and distilled water. While the flavor might not be quite as powerful as a vanilla bean paste, it’s certainly a wonderful alternative to artificial vanilla extract.

Looking to substitute your pure vanilla beans into recipes that call for some vanilla flavor? Let’s take a look at some direct conversions for one vanilla bean.

A single whole vanilla bean can be used in place of:

Fresh vanilla pods are a wonderful addition to your vanilla inspired recipes, whether used by themselves or as a way to create another form of vanilla flavoring. Consider purchasing the delicious vanilla bean as a way to add a powerful pop of flavor to your next baking project.

Madagascar vanilla beans are prized throughout the world for their flavor and quality. Last year (2018-2019), however, prices for these culinary favorites spiked up to unprecedented levels, with gourmet Madagascan Bourbon vanilla beans peaking out at over $600 for a single kilogram. With the island nation accounting for more than 70 percent of the world’s… 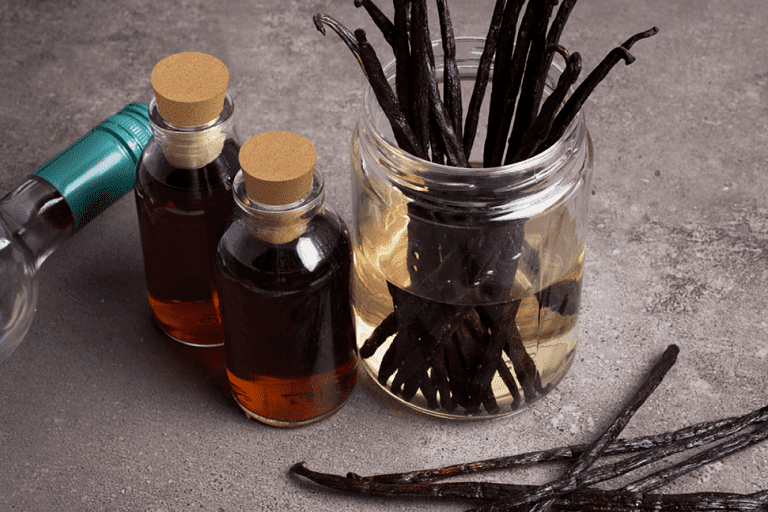 The Best Homemade Vanilla Extract Recipe Vanilla extract is one of the most common baking ingredients. A splash of vanilla extract can add that tiny bit of oomph to your baked goods, enhancing their flavor and making them that much sweeter and more delicious. Most Store-bought vanilla extract is not pure. Most commercial vanilla contains…

Best Vanilla Bean Recipes While getting vanilla beans from the jungles of Madagascar to your plate is anything but simple, cooking with vanilla beans is easy and makes your recipes both livelier and more flavorful. While vanilla beans can be a little expensive because of their complicated growing process, you generally only need a small…

The Origin of Vanilla Beans We’ve all been familiar with vanilla since we were small children – a scoop of vanilla ice cream was probably the first dessert we ever tried. So, where did vanilla actually come from? For people with only a basic knowledge of vanilla – hello, synthetic vanilla-flavored ice cream – you may not…

Best Vanilla Beans When it comes to the best type of vanilla bean, it comes down to your own preferences in regards to taste and aroma. There are four extremely popular types of vanilla beans that you should try. Each is grown in a different tropical country with its own unique taste, flavor, and smell….

Best Method for Storing Vanilla Beans Have you recently purchased a bunch of plump, moist, and delicious vanilla beans? Are you slightly panicking because you have no idea how to store them? Let’s face it, they’re expensive! And you want to make sure you care for them properly.  We’re going to take you through some…